The Ontario government recently announced, then withdrew, a new Health and Physical Education curriculum.  They withdrew it because of an outcry claiming that this new curriculum was bad.  Some rabid protesters even said it was "bordering on criminal".

Ironically almost nothing in this curriculum is new and almost nothing in it is being taught earlier than it was.  I went to a Catholic school and we learned all about the reproductive system and the names of the body parts.  We learned about relationships.  We learned about puberty.  A couple of these topics are being taught a year or two earlier but that is not really a big deal.  And the "Healthy Relationships" material is geared towards identifying harm, such as abuse and neglect. It is not about trying to enumerate all the possible healthy relationships that might exist.  If you think it's a bad thing for a 6-year-old to be able to tell an adult that someone inappropriately touched him on the penis, maybe you should get a job working for the Pope's child-abuse squad.

This whole thing should be a tempest in a teapot, but sadly there are too many people who are afraid that they won't be able to tell their kids that being gay is wrong, or that God will punish them if they use a condom.  Rosie DiManno says that, especially in Toronto,


such a richly multicultural city, where so many families are immigrants and first-generation Canadians of diverse, often conservative faiths and cultures, it was demanding a great deal for parents to accept invasive sex instruction in the schools at complete variance with ethics taught at home. While many of us may disagree with some of those moral paradigms, we can’t compel others to change their personal views, or meekly hand us their very young children so that we can shape theirs.

Actually, we should demand that they hand us their children so we can fix their broken brainwashing at home.  The schools already do this to a great extent.  Schools teach that racism is wrong.  They teach that humans evolved from some other primate.  They teach that the world is round.  These are simple facts about the world, and it is the school's job to teach these facts, even if the parents want to stick their heads in the sand.  And for those sexually-conservative parents who want to pretend that homosexuality is a choice, or that God hates fags, or some other brain-dead concept, well, the schools should be teaching their kids too.  Everyone is entitled to an opinion but you are not entitled to your own facts.

Finally, it has come out that the Catholic school board had been negotiating permission to teach a different curriculum.  I went through the Catholic school system and it was not too bad, but there were definitely some missing parts (we did not really learn about contraception).  Coincidentally, the Catholic high school in my city had an unusually high number of girls drop out because they were pregnant.  Our school didn't have any facility to help such girls and so they typically went (out of sight, out of mind) to a different school that had daycare facilities.  These girls might have been in a different position if the principal (a nun) hadn't thrown away boxes of free condoms given to the school to supplement the health program.  It is time for the Catholic School Board to teach proper sex-ed.  We don't live in the 1950s anymore and the fact is that teenagers have sex and STIs are on the rise.  Abstinence-only education has been proven to not reduce pregnancies nor STIs.  And a good portion of the Catholic laity is not opposed to STIs (witness the demonstrations when the Pope came to Downsview).

The premier has said that the curriculum will be re-opened for discussions and may be revised.  If people actually READ the new curriculum maybe those discussions will be useful.  But probably the homophobes and condom-phobes will ruin things for everyone.

Posted by Mr. Shiny and New at 4/28/2010 10:58:00 p.m. 2 comments:
Email ThisBlogThis!Share to TwitterShare to FacebookShare to Pinterest
Labels: Current Events

I've been upgrading my PCs a lot lately and it doesn't always go so well. Usually I end up wasting a lot of time just trying to restore whatever I had working before. Well, my wife and I decided to throw caution to the wind and upgrade something else. It's a project that's been underway for some months now and the result is here!

A couple years ago we upgraded our family to the "One daughter" model. To this day I still marvel that there is a third person living in our house, rooting through the cupboards and greeting me at the door when I arrive home. It's been a wonderful adventure and now we are beginning it again. We have now moved up to the "One daughter, One son" model. The birth of my son is not the turning point that his sister's birth was, but nonetheless his arrival is still just as thrilling. I don't want to continually compare him to his sister because such comparisons are somewhat unfair. When I first held her my heart was so filled with joy I thought it might burst. It turns out there is room for yet more joy. 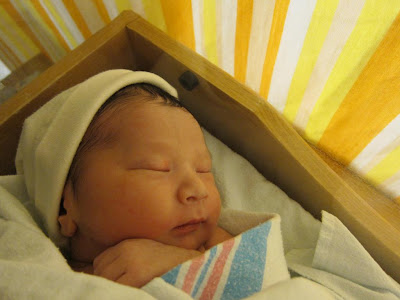 Once again I was on hand to "assist" in delivering the baby. My role was to provide moral support as my wife did all the real work and I mainly took photos and made the requisite phone calls afterwards. But being there when he was born was an incredible experience. His mother pushed him out, despite his being over 8 lbs, as if she'd been birthing babies for decades. I felt truly surplus while this was going on but I nonetheless turned down the ritual cutting of the cord because it still makes me a bit squeamish. Once everything was done and I got to hold my son the real magic began. He was tiny and squirmy and the look on his face said "What is going on here?" but at the same time he seemed to be taking it all in and evaluating it.

After his mother recovered and the doctors decided everyone was healthy we were discharged and allowed to return home, where there is a bed to "sleep" in.
My daughter is on vacation with her grandparents so we have a few days to adjust to the new addition, but she will return soon enough and we have to return somewhat to business-as-usual. As if that is possible now. But I have to assume that we'll muddle through somehow.

Now that we are home, trying to re-establish our routines I find myself thinking about the future. Until the baby sleeps through the night I imagine our family life will be a tad hectic and frazzled, but hopefully he'll sleep well like his sister did (there goes another comparison) and we'll be "normal" again in a few months. Then the real fun will begin as he grows into a person. I can't wait to get to know him. Will he be creative? Maybe. Argumentative? Almost certainly. But most importantly, he will be someone new. When I look into his tiny eyes I see nothing but potential and adventure.

I'd like to once again thank the staff at North York General Hospital. Not everything that happens in that hospital is perfect, but the delivery and mother/baby units are pretty awesome. The staff was very pleasant and professional and the Tim Hortons there sold me three coffees that were Roll-up-the-Rim winners. Frankly the only thing that could have made the hospital better is if there were more private rooms, so that the dads can spend the night in relative comfort instead of sleeping in a wooden chair (or, in my case, two wooden chairs, pushed together. It was less comfortable than it sounds).
Posted by Mr. Shiny and New at 4/03/2010 12:44:00 p.m. 1 comment:
Email ThisBlogThis!Share to TwitterShare to FacebookShare to Pinterest
Newer Posts Older Posts Home
Subscribe to: Posts (Atom)