The Christmas season brought several new Lego kits into my home, one of which was the City of Atlantis. This is a fairly large set, with 686 pieces, and it mainly consists of a sunken Greek-inspired temple, along with a small submarine and a brick-built giant crab. 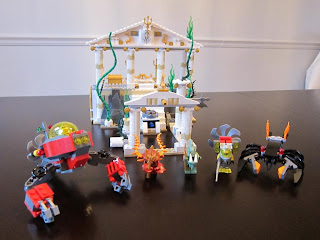 There are 5 minifigs which come with the set: two human divers, two aquatic monsters, and one human statue.  The monsters are not bad; they both consist of a printed torso and a rubbery "head" which covers the torso to some degree. The red monster has lobster claws, which are basically lobster-claw-shaped accessories that a standard minifig hand holds onto. 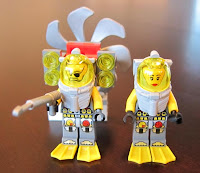 The submarine is a small sub with room for a single minifg inside. It features a green tome, a large propeller, two flick-fire missiles, and two arms with claws suitable for picking up sea treasure or recalcitrant monsters. The sub is well-built, using fairly generic parts to good effect, and doesn't have any glaring flaws such as huge gaps in the cockpit. It isn't very detailed but it also isn't the main focus of this kit. 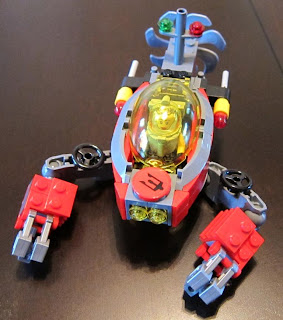 The crab is a brick-built monster that defends the temple. Again, the construction is simple and elegant, not over-doing it but providing a nice little "bad-guy" counterpoint to the submarine. The pieces used are fairly generic and useful and it looks good and is somewhat poseable. I guess in the Lego Atlantis storyline, the monster sea creatures like this crab are actually machines, or so the stickers would suggest. I don't really like stickers on Lego, so I left several of them off where I felt they weren't essential. 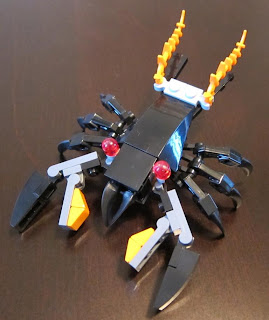 The city itself, or rather, temple, is a pretty good representation of the facade of a Greek temple, if that temple had been submerged underwater for some time and partially ruined. There is a broken column, some seaweed, a locked gate, a treasure chest, and an arch. The temple's roof is just two narrow plates, but from the front it looks good. It's fairly obvious that a Lego kit such as this would never include proper walls or an enclosing roof, but given the constraints the overall look is quite good. 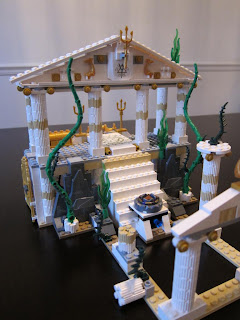 There are several booby-traps in the temple; the archway leading to the steps has an axe that can swing down; there is a trap-door, and the column that isn't ruined is hinged so that it can fall over (I suppose that might not be a proper trap, per se). There are also two flick-fire missiles in the roof of the temple but I'd rather pretend those aren't there.

One thing that strikes me as odd about these traps is that given the underwater setting, traps which rely on gravity (falling axe, trap door, falling column) seem pretty out of place. Couldn't an invader just swim down from above? In fact, that's the most likely angle of attack anyway, given that the good guys have a submarine. Maybe those traps are left over from when Atlantis wasn't submerged? One can only guess. 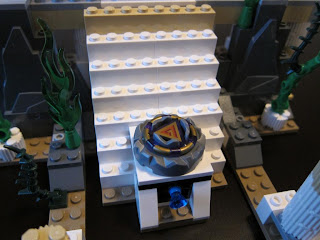 I've left the most interesting detail of this kit until last. This kit, like several other Atlantis sets, features a "key" which can be used to unlock a secret. At the base of the temple steps there is a round pedestal which turns freely, until the key is in place; when the key is in place turning the key causes the statue minifig to pop up from under a trap door. This little mechanism is quite nice and very fun to play with (statue goes up, statue goes down, statue goes up...). I think many fantasy creations besides "Atlantis" could use a mechanism like this and can foresee this sort of feature becoming an element in one of my future creations. It's all connected underneath with Technic parts, so it should be easy enough to extend into any kind of complicated machinery. 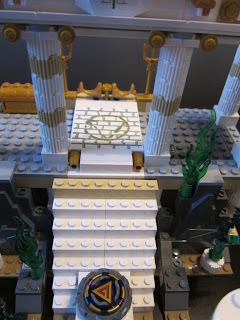 Overall, I find that this is a very well-designed kit. Many of the Atlantis kits didn't interest me and I avoided the theme until now. This set, however, is quite nice. The pieces are almost all universally useful. It is a good source of white parts, especially the grooved round bricks that make up the columns. The minifigs are good. The kit is well-designed with lots of interesting play features. My only complaint is the stickers. I still find it annoying when parts require stickers. I understand that this keeps the price down, but to me putting a sticker on a piece is almost as bad as painting a piece or cutting one. Don't ask me to explain that, I know it's irrational. 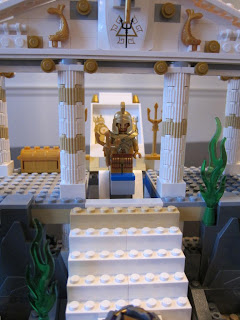