So I finally read the final chapter in the Dune saga, brought to you by Kevin J Anderson and Brian Herbert.

A more clumsy work I have never read.

If you read the Dune books and wondered what ever happened after Duncan Idaho and his no-ship fled the old man and old woman, or who the great Enemy is, you probably wanted to read "Hunters of Dune" and its sequel, Sandworms of Dune. Let me tell you right now: you are better off not knowing. Because no matter what grandiose vision you had for Kralizec (the final battle for the fate of humanity against the great Enemy), you will be disappointed.

First off, the writing in the book is even less subtle than Hunters of Dune, with several scenes put in place seemingly for the sole purpose of spelling out what was blindingly obvious already. Then we have the completly boring and unrealistic battle in the lair of the Enemy. (I'm trying to keep this spoiler free for those of you who plan to disregard my advice and read it anyway). If you know already who the enemy is, you're probably wondering what purpose this enemy would have with a lair, and also wondering how you fight said enemy once you are in his lair. Well, Kevin and Brian don't disappoint, in that they painstakingly spell out every single step of this improbable conflict.

The book is full of side plots that go nowhere and people behaving irrationally, much like a cheap action movie villain, who wants to take over the world but can't just kill the hero outright, he has to contrive some elaborate trap which ultimately fails.

Then there is the question of the Enemy itself, which to me feels like a cheap way for Brian and Kevin to tie in their prequel work with the original series. I'm still wondering if this is anything like what Frank Herbert had in mind.

At least the mystery of why Duncan Idaho was resurrected so many times was revealed. But if you thought there was some deep meaning, it turns out there wasn't. So don't get your hopes up.

Maybe after I feel ok about revealing spoilers I'll go into detail about what was really wrong with this book, including how I think it could have been made 10x better. But basically, considering the nature of the Enemy and the characters involved, a better author could have written a gripping tale that incorporated the best themes of sci-fi from the last few decades and the ideas from the Dune series. Instead we got lousy action scenes, bad dialogue, and a terrible plot.

But at least now I know how the story ends and I don't have to read any more of these books. Now when I finish reading Terry Goodkind's series I can put all the bad authors out of my reading list.

Posted by Mr. Shiny and New at 7/29/2008 12:40:00 a.m. 2 comments:
Email ThisBlogThis!Share to TwitterShare to FacebookShare to Pinterest
Labels: Books, Reviews 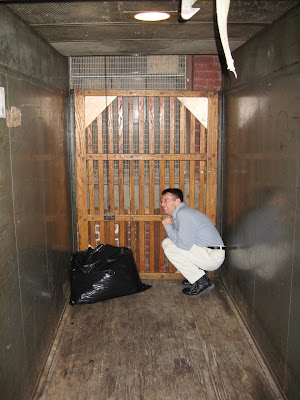 People who think they're more important than everyone don't surprise me anymore (though I do hate them) but I am always amazed at how few people grasp the concept of "You can't get on without letting others get off first".
Posted by Mr. Shiny and New at 7/14/2008 01:14:00 p.m. No comments:
Email ThisBlogThis!Share to TwitterShare to FacebookShare to Pinterest
Newer Posts Older Posts Home
Subscribe to: Posts (Atom)