For some reason Apple seems to really really want me to install iTunes. I don't have an iPod and I've never installed iTunes, but I did make the mistake of installing QuickTime. When you install QuickTime it installs Apple Software Update, which is good because there have been serious security bugs in QuickTime, but Apple uses the software update to try to force-feed you iTunes, so that they can maybe con you into buying their DRM'd products. 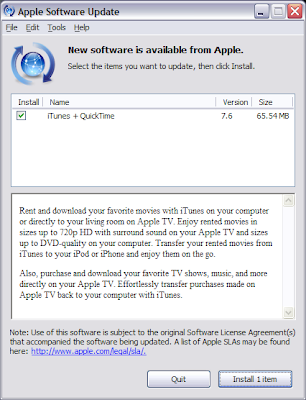 Please, Apple, stop trying to force me to install iTunes! Installing unneeded software on a computer is bad; it can make the computer slower or less stable, it can be a security risk (what if Apple Update stops working? now I have an insecure QuickTime AND and insecure iTunes), it can confuse users by changing their settings (gee, WinAmp used to load when I clicked on an MP3, now it's iTunes?), and it wastes disk space and clutters the Start Menu.

Equally annoying is that all the benefits iTunes supposedly bring me are tied to other Apple products: the iPod (don't have one), the iPhone (not available in my country), Apple TV (don't think it's available here), the iTunes store (music locked to your account, can't be easily backed up or sold or played on a non-iPod device)... iTunes doesn't really bring anything good to the table; it's more of a necessary evil if you use one of those other things. Which I don't, which is obvious to Apple because I don't have iTunes installed. If I needed iTunes, it would be there already.

What's worse about this situation is that Apple does two sneaky things to try to con you into installing iTunes: first, it calls the package "iTunes + QuickTime", which is maybe confusing because people think "Oh, I do have QuickTime, maybe I need this update", and also they prompt you to install it even if you've already declined before.

Apple lets you "ignore" updates, which makes them disappear from the list, but irritatingly they pop back into the list whenever the updates are updated. This means that even though you repeatedly tell Apple to screw off, they still insist that you install iTunes.

I've searched on Google and haven't found a way to stop this spamming short of shutting off automatic updates of QuickTime (and any other Apple software I might have, like Safari). I guess I'm stuck denying them again and again. Or maybe I'll just uninstall QuickTime and Safari and banish Apple from this computer entirely.

Posted by Mr. Shiny and New at 2/08/2008 01:28:00 p.m.
Email ThisBlogThis!Share to TwitterShare to FacebookShare to Pinterest
Labels: Computers, Reviews

At first it looks like all these damn Yahoo or Google toolbars that I don't want, but with Apple Software Update that's too much.

Do we have to boycot software editors that want (or force you) you to install other unwanted softwares ?

Don't use quicktime. Get mediaplayer classic with the quicktime lite plugin. I use that and the realmedia plugin as that was another obnoxious spamlike piece of software.