I recently found the Lego Kingdoms set 7189 on sale at Toys R Us and decided that I had to have it. 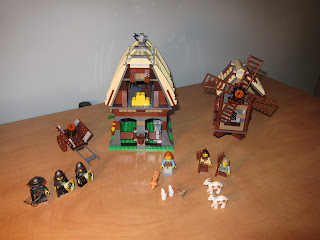 There are lots of things I like about the latest Kingdoms line. First, I am crazy about the evil faction, the dragon knights. They have great minifigs and colours. So a set that features these minifigs is always nice to see. Of course, the main highlight of this relatively large set is not the knights, but rather the peasants. 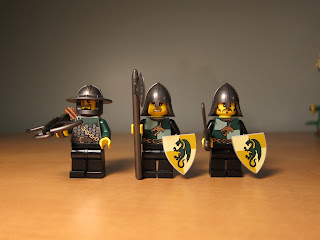 This set represents the continuation of the recent years' foray into medieval scenes featuring civilians. In the past, virtually all Castle sets featured only combatants, except the odd wagon now and then that might have a lonely farmer. Lately, LEGO has added more "daily life" sets to the mix. One signature set in that series was the Medieval Market, which featured medieval city buildings, farmers, cattle, food, and other day-to-day things you might find in a medieval city.  Now with 7189 they are bringing out a rather large farm set that really shines. 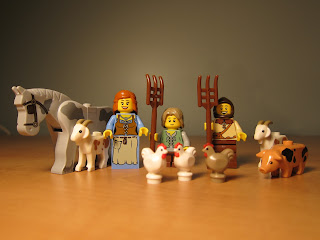 This set is divided up into four stages. Each stage has numbered polybags of parts, so that it's easy to assemble the first time. The first bag has the minifigs and the wagon.  The wagon is nothing great but frankly, who cares. Lego has almost never put out a good wagon and that never bothered me. It serves the purpose of having something to hitch to the horse. The horse, by the way, is really nicely done, with shaggy hooves and blinders. Not a warhorse at all. Aside from the horse, you also get three chickens, two goats, and a pig. I've never seen Lego farm animals before and I have to say that these are really, really, really cute. They look good next to the farmer, his wife, and their son (who needs a haircut, in my opinion :) ) 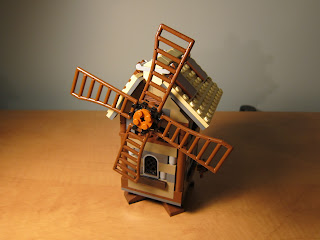 The second stage is the windmill. This is a nice little building, on a rotating base, with a sloped roof. The windmill actually rotates a central shaft that has a grindstone on it. You can turn a crank or turn the blades themselves and the stone grinds. It's really well done. The only thing I didn't like about this windmill is that it's very fragile, for a building. I can never recall when I've ever accidentally crushed a model I was building while trying to attach a piece, but this happened a couple of times while I was putting this together. 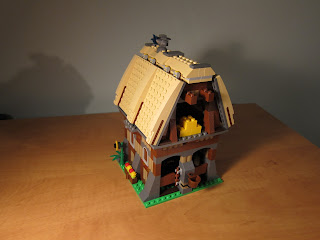 The third stage is one half of the barn, and the fourth stage is the other half. The barn is well made; it swings apart so that you can reach inside, and it features a winch, a trap door, and two stalls for the animals. The construction is fairly sturdy and it looks nice when it's completed. There is not too much to remark on, construction-wise. 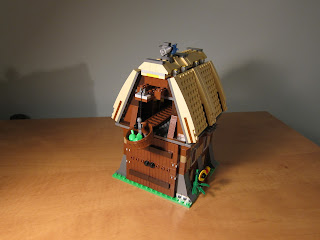 One thing I did notice is that this model shows how some of the parts in the Lego repertoire have evolved over time.  Consider the door that is used on the mill. On an older kit, this door would be used. It attaches using a special brick that has little tabs hanging off. This mechanism is very old; I have lego from the early 1980s that uses this for shutters. It's also fairly fragile; the tabs on the brick could break off, and the doors fall off during play. In 7189 the door looks like this, and the clips that hold it in place are standard vertical claws. In this particular model, the claws are part of a giant, 3-tall brick with the claws permanently molded in. But there is nothing special about these claws and any standard claw can be used.  The same is true of almost every other hinge in this set. The older hinges have all been replaced with standard claws.  This is an amazing improvement, because it means that you can now be far more versatile in how you connect these pieces. I'm a bit disappointed that all my old doors are obsolete but I'm glad to see real progress.

The other thing I was glad to see in this model is that there are virtually no off-colour parts that are included for bizarre reasons. LEGO often puts a single bright-blue brick in the middle of a model for some reason. In this set, that was kept to a minimum and most of the colour variation is on-palette, that is, it's different shades of brown and grey. And I love the new super-dark brown, and the dark-tan, both of which are used a lot in this set.

Overall, aside from the fragility of the windmill, I find that this set is extremely well constructed. The part selection is really good. The minifigs and animals are excellent. Overall a very good set and worth owning.

Posted by Mr. Shiny and New at 10/02/2011 11:00:00 p.m.
Email ThisBlogThis!Share to TwitterShare to FacebookShare to Pinterest
Labels: LEGO, Reviews