Another of the LEGO kits I bought at Toys R Us's recent sale was the Castle-series kit 7009 "The Final Joust". This is a small kit that would normally retail for $7.99 US but in Canada retails for a zillion dollars, or some other ridiculous amount. But enough about Lego Corp's inability to understand currency conversion, let's talk about the set.

The main theme of this set is a jousting match between an evil skeleton and a good knight. You can tell that the skeleton is evil because he looks angry; his eyes are red, he dresses all in black, and he's a skeleton. These things always indicate evil. The skeleton in this set is armoured, which is implemented by the simple means of it being a regular minifig body with a skeleton head. The result is pretty good; the skeleton has one of the helmets introduced in the KKII line that looks really nice with the body armour. The good guys are represented in this kit by a knight wearing full armour and sporting the popular pointed visor helm, now in a shiny metallic finish. The rest of the set is a fence, alongside which the competitors joust, and a weapons rack.

Overall this kit is pretty good, parts-wise; nothing in the set is wasted or useless. My only complaint is that the inclusion of two horses means the kit is expensive considering the meagre contents. I've never really been a fan of LEGO horses but I can appreciate that other people like them a lot and want whole troops of mounted warriors. That's fine, I guess, and this kit is a good source of said warriors. 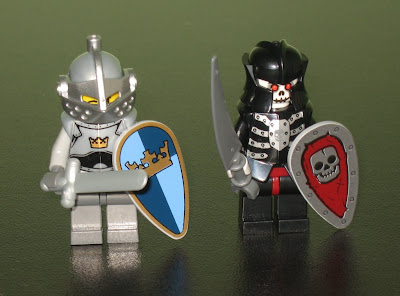 The minifigs themselves are pretty good, but not perfect. These days a perfect fig is fully printed and comes with extra pieces; LEGO has cut costs over the last few years and no longer makes such ideal figs. Thus these figs are perfect in their default configuration: They look good in their armour and come with a good set of weapons. But their torsos and legs are blank, which means if you take off the armour you get two guys (one really pale guy) wearing their pyjamas. Given the cost realities I won't hold this against LEGO but I miss the days when figs had printed torsos and legs AND a full armour set including plumes (which sadly won't be included in any future LEGO lines for cost reasons... sigh).

The jousting fence and weapons rack are nothing impressive by themselves but are a good source of specialized bricks, including arches, dark-blue jumper bricks, bricks with claws in the middle, and those gold roof pieces (if you like the new Castle theme colours, those are invaluable for decorating a bigger castle).

My recommendation for this kit is: at the US retail price it's reasonable, and worth buying. LEGO has listened to the criticisms of their widely-panned Knights Kingdom II line, and released a good line of Castle products with a good assortment of good guys, bad guys, and parts.

Posted by Mr. Shiny and New at 10/21/2007 10:13:00 a.m.
Email ThisBlogThis!Share to TwitterShare to FacebookShare to Pinterest
Labels: LEGO, Reviews