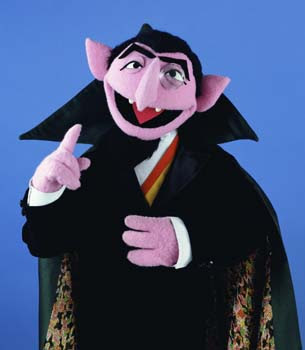 You know, I never understood the vampire on Sesame Street. I'll admit it: the pun was lost on me. To me he was a vampire, like Dracula. Sure, Dracula's "title" was "Count" but that's just a label the nobility have, like Baron or Duke. I never wondered what kind of noble the vampire on Sesame Street was, and it never occurred to me that he counts things because he's a Count. I didn't figure this out until years later, when a friend's band (Chucky Jenkins and the Psychedelic Caterpillars) wrote a song about how scary Sesame Street was. In the song they mentioned the purple vampire counting everything in site, and it was only when I said, "What was that vampire's name?" that everyone laughed and I realized what a dumb kid I'd been.

Anyway, it turns out that our favourite blood-sucking muppet isn't the only vampire that suffers from OCD. Did you know that Vampires can't resist counting seeds if they find them on the ground? Simply spreading a bunch of seeds around a vampire's grave keeps them occupied all night counting the seeds, which leaves them no time to come terrorizing your village. So you can add one more bullet to your list of how to recognize a vampire: they obsessively count things. It's really true that everything you need to know you learned from Sesame Street.