The last set I bought in the 2007 Lego Castle line is the 7091 Catapult Defense. This set is comprised of two knights with a catapult attacking a skeleton fortification "manned" by two skeletons, one white and one black. 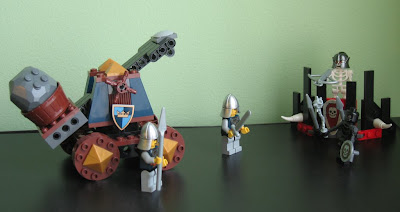 This set is notable for the inclusion of the black skeleton figure, who helps provide a little variety for your legion of undead warriors. It's not clear WHY the skeleton is black, perhaps he's been burned, or maybe it's the evil magic that animates his emancipated corpse, but most likely it's just that he tested well with the focus groups.

The good guys in this set are two generic soldiers, one armed with a spear and the other a sword. As always, the swords used by the good guys are the classic broadsword design (other sets in the series sometimes use the greatsword), which is one of the most key improvements LEGO made in this series: axing the new "zword" and returning to the, dare I say, perfect sword of ages past. 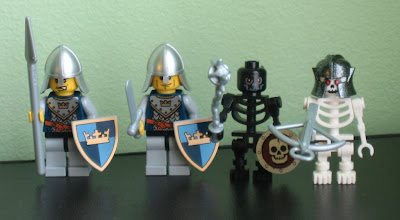 The bad guys are armed with a morningstar and crossbow, but their fortification also has spears and spikes on it. However if the good guys manage to land a rock on it from the catapult, that puny wall won't hold up.

This set is a good mix of figs and parts, for a decent price. The catapult is well built, and contains a minimum of useless pieces. The parts can be re-used to make a serviceable wagon (though you'd need a horse from another kit). The barricade itself is rather small, really more suited as an attacker's hastily-erected defense rather than the defender's main wall, but it serves the purpose of giving the catapult something to smash. The only thing that would have made this set better (aside from gobs of minifigs) is if the fortification were a little more substantial; growing up with a brother has sensitized me to unbalanced toys where one brother gets the "bigger half". If the fortification had twice the pieces it would be a serious opponent to the catapult and would lead to a good split for two brothers to share.

Overall this set is worth buying but it isn't as good an army builder as the crossbow cart, however you do get shields and swords for your soldiers which is always welcome.

Posted by Mr. Shiny and New at 11/14/2007 08:00:00 a.m.
Email ThisBlogThis!Share to TwitterShare to FacebookShare to Pinterest
Labels: LEGO, Reviews