For Christmas I received a LEGO kit, number 7020, which is the "Army of Vikings with Heavy Artillery Wagon". This kit is truly the prime Viking army builder, in terms of number of minifigs and variations among them. The Chess set has the most figs in one box, but in that set they are rather uniform in appearance, while in this set they all look different. 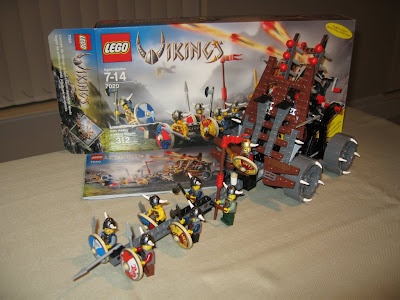 The set itself contains 312 pieces. Each minifig is 6 pieces (leg assembly and torso assembly each count as one piece), including helmets but not including weapons. There are 9 weapons, 5 shields, one 4-piece flag, and 7 figs total; this accounts the first 68 pieces; the rest are devoted to the heavy artillery wagon.

I'm not sure if Vikings were known for artillery, and in fact I question the historic accuracy of this entire kit, but there is something to be said for the huge wagon that comprises the primary model for this kit. It is basically a black frame, made of technic pieces, with a brown and grey "wooden" front, and a strange-looking apparatus behind the facade. This contraption is actually a double-barrelled rapid-firing ballista. There is a crank at the back of the wagon which causes a red paddle to flip down on a spring-loaded piece, which snaps back and launches a missile out the front of the wagon. There are ten rounds and this thing can fire them off very quickly.

Overall this set is quite good. It has many useful parts, and a large army, and it serves as an excellent model for young builders to hone their artillery-building skills. The technic pieces can be re-used to build more historically accurate wagons or, more likely, to build other kinds of shooting weapons. The Vikings would have loved to have had this back in the middle ages, I'm sure. It is great fun to watch an army of minifigs get decimated by what is essentially a machine gun.

Posted by Mr. Shiny and New at 6/25/2007 07:15:00 a.m.
Email ThisBlogThis!Share to TwitterShare to FacebookShare to Pinterest
Labels: LEGO, Reviews