I recently bought a W810i from Rogers. It's a pretty nice phone; after using it for a couple months I find that I am generally happy with it. Usability-wise I find few major issues (but several minor ones). This is part one of my review, in which I discuss what I like about the phone. 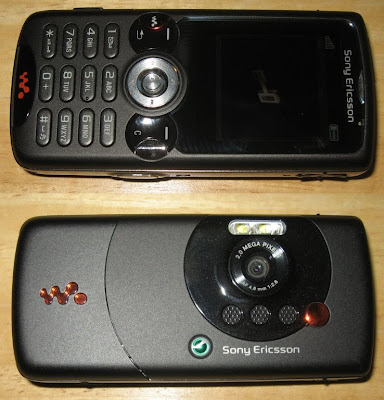 First Impressions
The phone started off on the right foot with the packaging. It has one of the most elegant boxes ever; everything inside is nicely bundled in sleek black boxes that all fit together, and the phone sits in the middle like a show-piece. Compared to the iPod Nano, which has this ridiculous plastic case that's smaller on the inside than its contents, the W810i box was easy to open and it was easy to get the goodies out and back in again. I don't like destroying packaging just to get at the product and this box sure won in that dept.

Once I started using the phone I was generally happy with the features. Nothing really surprised me except the playlist sorting flaw (which I will discuss later). The phone has lots of options, ranging from wallpaper, ringtone, colour theme, to how long the infrared or bluetooth ports are on, and whether or not the phone auto-locks the keypad. I found that the options were reasonably well organized and generally made sense. The only strange thing is messaging has its own options section which is separate from the main settings area.

As far as basic usage of the phone is concerned, there is nothing to complain about. The menu is very responsive; there is nothing strange involved in making a call, just dial and click "call"; you can easily see your outgoing, incoming, and missed calls; the indicator icons for things such as new text messages are easy to see and understand; the phone can vibrate and ring at the same time (not all phones can), and the phone tells you the time even when it has no signal (my old Audiovox phone could do neither of these two latter features, which is why I mention it).

The Good
The phone has a button which starts the Walkman application, which is the #2 feature (or maybe the #1 feature?) of this phone (the other main feature being making calls, of course). The Walkman application lets you play movies or music (no Ogg Vorbis, sadly) but I only use the music feature. This is flawlessly integrated with the phone: when you are listening to music and a call comes in, the music pauses and you can answer the call, and when the call is done the music resumes. You can play/pause the music with an external button and also control the volume and skip tracks, even when the keypad is locked. When there are no headphones, the music plays on the phone's rear speaker (the same speaker used to play ringtones). This speaker doesn't have great quality but it's still ok for a bit of casual listening. The headphones that come with the phone are the in-ear type, the kind you push in until they touch your brain. They are fairly comfortable to wear and small enough to put into your pocket when not in use. The phone also supports FM Radio, which is integrated as well as the walkman app. In fact the play/pause button will play either the radio or the walkman depending on which app was last used. That's convenient.

The phone ships with a 1 GB Memory Stick Duo, which is a cute little Sony-proprietary memory card, but Rogers was having a promotion when I bought the phone so they mailed me a 4GB card. This makes the phone a very compelling MP3 platform, except for the audio issues.

The phone also has Java (J2ME) installed, and unlike some phones, it loads quite quickly and is very responsive. I was apprehensive about Java on phones but I find it to work very well. The J2ME apps load faster than the built-in web-browser, actually. I downloaded DoomRPG and spent some time blowing up pixellated Imps. The phone comes with 4 games but two of these are pure demos: play for a few minutes and the game ends, while the other games are limited in scope but fun to play.

The phone comes with a USB cable that is capable of charging the phone, as well as a dedicated charging cable. The USB cable doesn't charge the phone as quickly as the dedicated charger, but it does let you copy files to/from a PC, as well as synchronize your phone's contact list and use the phone as a modem. The modem feature is useless to me so I haven't tried it, but on paper it's a fantastic idea. As for file transfer, the phone shows up on the PC as two mass-storage devices, one for the phone itself and one for the memory card. This is very handy, both for adding MP3s and for general file storage.

The phone is also equipped with a 2 Megapixel camera. This camera has a light, which is almost as good as a proper flash, and it can focus to a limited extent. It also has basic zoom capabilities. I found that it doesn't replace a regular 2MP camera, but for a phone it is a very good camera. The pictures are conveniently stored on the memory stick making it easy to get them onto the PC either through the USB cable or using a card-reader. No need to rack up data-charges by sending the picture via email.

Tune in tomorrow when I'll discuss what I don't like about the phone.

Posted by Mr. Shiny and New at 6/12/2007 09:40:00 a.m.
Email ThisBlogThis!Share to TwitterShare to FacebookShare to Pinterest
Labels: Reviews, Usability