I bought a new keyboard for my computer because my old one was dirty. Well, also I wanted some more buttons on the keyboard, because I like the extra buttons my work keyboard has. Unfortunately the keyboard manufacturers have decided that new keyboards should have a different layout than old keyboards; they have changed the Insert/Home/Del/End/PageUp/PageDown layout so that instead of two rows with three columns, it's three rows with two columns. This annoys me to no end, as does Microsoft's newer keyboards where the function keys are in groups of 3 instead of 4 (on those keyboards the "function" doesn't even work unless you turn on "function lock"... yeesh). Anyway, my obstinate need for an old-school layout limited my choices of keyboard to the Logitech 350 USB ("I bought this keyboard because I had no other choice," he said. But you could also read it as: "This was the best keyboard I found, no other would meet my high standards").

The keyboard itself is nice, for a cheap $20 keyboard. It came with a mouse, which I will discuss later, and thus for that price you can easily justify replacing your old hardware with new gear that looks sleek (because it's black instead of beige). The keys on the keyboard feel nice and it is relatively quiet. There isn't much to say for or against the keyboard; it has 104 standard keys, in the traditional layout, and it also has eight special keys, for launching common programs and controlling the sound/music.

The mouse is a basic wheel mouse with a slight twist: the mouse wheel can tilt left and right, for left/right scrolling. Otherwise it's a simple mouse with two buttons. The mouse feels smaller in my hand than my previous mouse, which will take getting used to, and the mouse wheel is very hard to click as a third button compared to my old mouse. We'll see if I keep this mouse or go back to my classic Wheel Mouse. One other advantage the new mouse has is that it works better on a bare surface than my old mouse. Some optical mice work poorly on some surfaces; my Microsoft mouse at work hates mousepads and my Wheel Mouse hated my desk at home; the new mouse seems at home on my desk or on the mousepad. 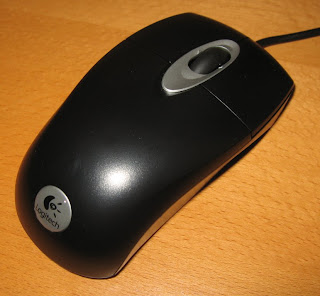 The hardware is fine, but unfortunately it seems that for this el-cheapo keyboard Logitech has decided that users will never need to customize the functionality of the extra keys. The extra keys are split, four on the left and four on the right. On the right are the application-starter keys with icons under them: a music note, an envelope, a house, and a calculator. These keys are hard-coded to open your system's default media player, your system's default mail client, your system's default browser, and windows calculator. On the right are the four keys that control playing/pausing music, and volume down, up, and mute. It's natural that the play/pause and volume controls would be hard-wired but lots of people would like to re-program the four program starters. I, for one, never use the calculator and would rather have some other program bound to that key. Also I don't use the default mail application, and lots of other people don't either; I use a remote mail application and lots of people use Gmail or hotmail or something similar. These people are not served by a mail button that starts Microsoft Outlook Express. Finally many people have some utility program that they use often, like notepad, which isn't one of these four blessed applications. Is it too much to ask that we can change what these buttons do? My keyboard at work is an older Logitech Internet keyboard and it can re-program all the buttons. 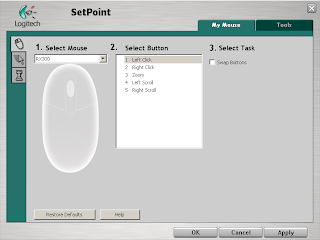 The situation isn't made any better by the fact that the Logitech software which ostensibly lets you configure the keyboard doesn't actually show any configuration options: the only tabs on the display are for the mouse and the "help" and "taskbar icon options". Real friggin' useful, Logitech. The help file for this software (it's called SetPoint) talks about how to reprogram the buttons, and indicates that there should be a keyboard tab on your settings page, but no such tab appears in the software. It's like they're taunting you with what you could have had if you hadn't bought the cheap keyboard. You don't need the software to use the mouse and keyboard, but you do need it to use the extra keys or the tilting mouse wheel. My verdict is that the software for this keyboard gets zero stars. 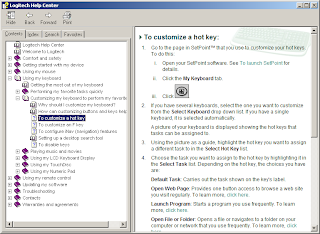 Thankfully, Linux is where I spend most of my time and there are zillions of ways to configure the buttons. I think I'll configure the "calculator" button to launch Solitaire. Tomorrow's post will detail the Linux configuration for this keyboard.

Posted by Mr. Shiny and New at 6/19/2007 08:00:00 a.m.
Email ThisBlogThis!Share to TwitterShare to FacebookShare to Pinterest
Labels: Reviews