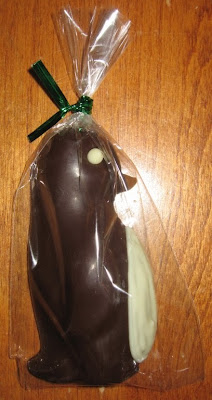 So I decided to buy some chocolate penguins for my wife for our anniversary. We had originally given away chocolate penguins at our wedding, and so I called the store that made them. Sure enough, they had two in stock, and I asked them to hold them for me. When I arrived to pick them up, the shop owner didn't remember me or the origin of the penguin mold (he'd ordered it for us) but he mentioned that these penguins were a special order. I was puzzled because when I called he already had them in stock.

The mystery was revealed when my wife and I exchanged gifts. It turns out she also had the idea to give me chocolate penguins, and had called the shop to get an estimate on the cost of the penguins. Since this shop rarely made these penguins the owner didn't know how much they'd cost until he made them and weighed the resulting creation. Consequently he made one batch of penguins, but my wife decided to get penguins elsewhere, and thus there were two penguins in stock when I decided to inquire about purchasing some.