Sometimes I think about tomorrow, or next week. Usually these thoughts are within one or two themes:
This kind of thinking is not what anyone would call long-term. For me, long-term thinking occurs when, on a weekend, I wonder if my wife has made plans for me for the next weekend. Sometimes I exhibit long-term thinking when I remember to marinate the meat the day before I mean to cook it, or, even longer-term, when I remember to buy the meat when I'm grocery-shopping.

There are, however, longer time-frames that I sometimes think about. OMNI Magazine had an article in the early 90s about how to store nuclear waste. The article discussed two problems: the first, and most obvious, is how to make a vault strong enough to store plutonium for 10,000 years; the second is stopping people from opening that vault 10,000 years from now. 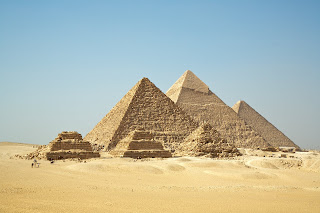 Consider the pyramids. We know them to be tombs, but much about them is lost. We don't know (exactly) how they were built. We don't even know how many there are, since many have decayed. People claim that the pyramids are cursed, but that's just what they'd say if the pyramids actually were toxic or radioactive and all who entered died painfully. If the pyramids were built to contain some evil, current generations are unaware of that evil and have entered and plundered most or all of the pyramids. Another mystery is the sphinx. What is it for, and why is it there? It could have been intended to frighten away would-be intruders, a job it has not done well. Nobody knows when, why, or by whom the sphinx was built, or even if it should be called a "sphinx" (legendary sphinxes were winged and had female heads, and were a Greek legend anyway, not an Egyptian legend). Now I don't really believe that the pyramids are ancient Egypt's nuclear waste dumps. But the point is we don't know much about them, and much of what we do know we only learned by entering the pyramids. What would happen to a future society that broke open our poisonous nuclear time-capsules? 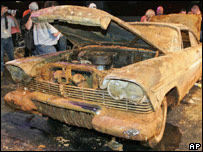 The problem is that we're no good at transmitting information across the ages. We can't even transmit an automobile across a few decades. The folks of Oklahoma thought, in 1957, that their car was safely stored for future generations, but when it emerged it was a rusted heap. Every document printed on thermal paper will disappear when it's a few months old. Documents printed with ink jets fade after a few years, even if the paper and ink are so-called "fade resistant". And in the 1980s the BBC tried to digitize the Domesday Book in a multimedia presentation, yet the computers used for this project are obsolete, and broken, and all the data is essentially lost. Ironically the original book, over 900 years old, is still around and perfectly readable, but the fancy digital version lasted only 15 years.

The Domesday project used custom computers to achieve a goal that wasn't practical on contemporary PCs, and thus, in a sense, sealed its own fate. But even modern software, designed to transmit information from one person to another, is falling to decay. These days PCs don't have floppy drives anymore, and lots of people don't even remember that there were dozens of floppy disk formats before the ubiquitous 3.5" floppy. Most of these are essentially unreadable to most people, and for archivists who need to access these old disks, doing so relies on hardware that is no longer manufactured and which nobody can service. The only solution to this is to re-archive all the data every few years onto newer storage devices. But the physical storage is the easy part.

The hard part of accessing the old file formats is the fact that these file formats are often designed to work only with a single program. These programs often won't work on modern computers, which leaves us with no way to access the data. Microsoft suggests running virtual computers with old software but even this will only solve the problem so far. The real, long-term solution is to use open file formats with clear semantics and documentation. This way it will be easier for archaeologists to reconstruct the old text when they dig up an old digital file.

Over time digital storage of information will be a great benefit to society, but if the information isn't archived properly it will all disappear. And even if we keep it, there's no guarantee that future generations will know how to use it. In some sense society fell into decline after the fall of Rome, and information was lost; over time people regained their lost knowledge, but can we be sure our current knowledge will be preserved? Or will we build devices meant to store our toxic waste, and our society's collective history and knowledge, only to find that the latter failed our descendants and thus the former injured them, because they had no way to know what it was?