I just got the LEGO Skeleton Tower, part of this year's Castle line. This set features a tall tower with a giant skull on it, whose drawbridge is the skull's lower jaw, as well as an evil wizard, a damsel in distress, two skeletal soldiers, a fearsome dragon, and a heroic knight on a white stallion. 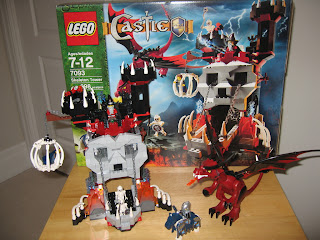 Overall the set features good playability because of its nice mix of good-guys and bad-guys and the skeleton tower looks pretty good from the front. The wizard can stand at the top, working his evil magic with his lightning staff and his crystal ball; there is a catapult that can fling burning rocks at the hero, and the dragon is, well, a dragon. The minifigs really stand out in this set; LEGO has fixed the mistakes of the past castle lines and given us great minifigs. The classic swords are back; the heraldry looks good and not too cartoony, the wizard is quite detailed and has an excellent cloth cape, and the princess has a two-sided head, so that you can change her from happy to scared by turning her head around. The evil undead skeletons are pretty good as well and have good weapons, including (in this kit) a flail and a sword that can double as a scythe. The evil shield is great as well. 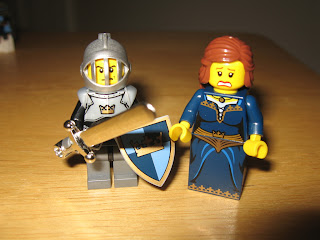 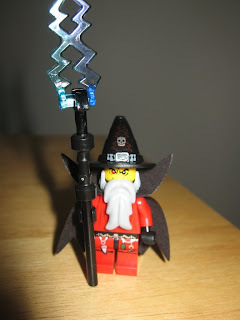 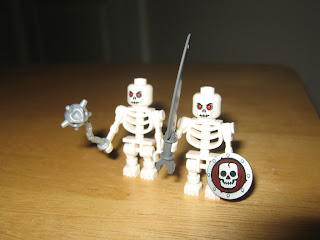 The set is not without its flaws, however. The skeleton minifigs in this line are different from the previous skeleton figs; the old figs had ball-and-socket arms and so couldn't hold a weapon while posed. The new skeletons have arms with a tight clip-hinge and thus can be posed, but their arms are perfectly straight, meaning they hold their swords at shoulder level. Also, unlike regular minifigs, the skeletons hands are frozen in the horizontal configuration, and can't be rotated. This limits their posability a lot and makes the skeletons look a little silly. This unfortunate situation affects all the castle sets this year.

The skeleton tower also has its own defects. There are two main defects: First, this set, like most LEGO castles, makes no attempt to be "anatomically correct" and thus is full of unreachable places; there is no way for a minifig to get to the top of a tower, or even up to the dias where the wizard has his crystal ball. However, worse is the construction of the tower itself: there are gaps everywhere that are not aesthetically pleasing, and there is what appears to be a middle storey in the tower that is not tall enough for the minifigs to stand in. It's a shame because the set could have 20 more bricks and it would be significantly better. 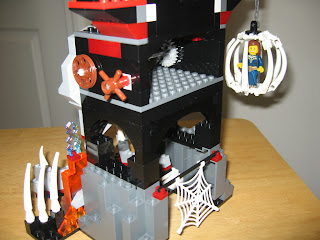 Overall the set is quite good and a worthy set for the castle line. It features some compelling minifigs and lots of useful parts, and enough potential for hours of play.

Posted by Mr. Shiny and New at 7/28/2007 06:23:00 p.m.
Email ThisBlogThis!Share to TwitterShare to FacebookShare to Pinterest
Labels: LEGO, Reviews