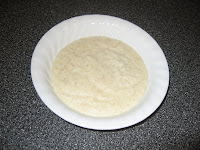 ed in 1893 and first promoted widely at the Chicago World's Fair, this is a basic food that fills you up and warms you on those cold days in winter or when your air-conditioning is on too high. The box art for cream of wheat usually features a black chef, who dates back to the days when it was fashionable to adorn new products with black faces (such as Uncle Ben or Aunt Jemima). This chef is named Rastus, and if you visit the Wikipedia link for Rastus, you'll see that his image in early advertising was not very complimentary. However these days such obviously racist ads are a thing of the past and we can enjoy our hot cereal without insulting anyone. 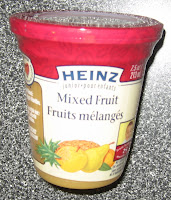 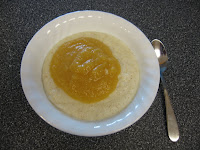 I like to prepare cream of wheat using milk to give it a better flavour; I tried once with water and it was basically awful. I mix 3 tablespoons cream of wheat to 1 1/4 cups milk, and boil until it thickens. This gives a nice solid bowl of cream of wheat that is rather bland, and is in need of the secret ingredient. My secret ingredient is Heinz Mixed Fruit baby food. This is pureed fruit, much like applesauce. Just mix in some mixed fruit and voila, a delicious hot breakfast. I've been eating cream of wheat this way since I was a baby; my aunt recommended feeding me cream of wheat, but when my mom made it she thought it didn't taste good, so she mixed in the fruit. Since then I've even introduced this recipe to others. It sounds strange but it tastes great.

Posted by Mr. Shiny and New at 7/29/2007 10:30:00 a.m.
Email ThisBlogThis!Share to TwitterShare to FacebookShare to Pinterest
Labels: Recipes